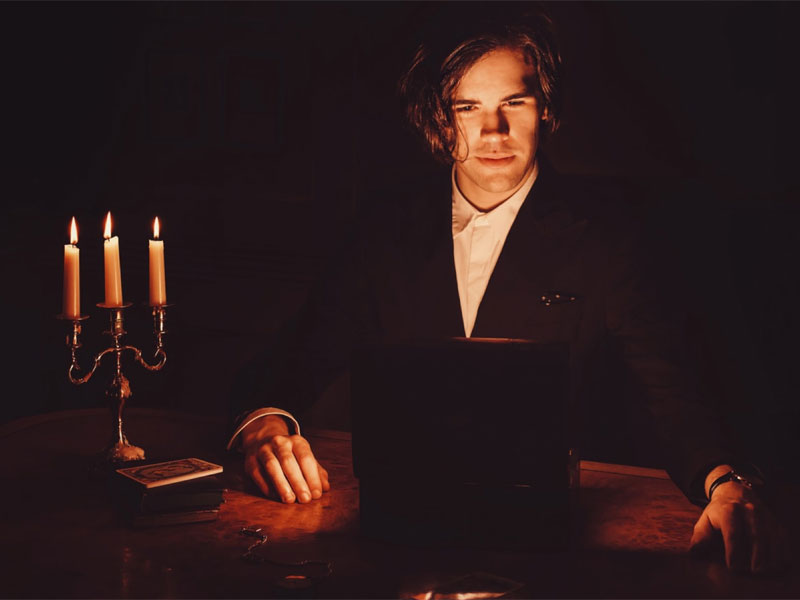 All performances of Wonders at Dusk are sold out. There will be no ticket sales at the door. Please watch our FaceBook page for any that become available.
If you have tickets and can’t make it, please let us know.
At the Palace Theatre

Intimate theatre-style performances offer first-come, first-served seating in the Palace Theatre. Boutique bar menu is available before and after the performance.
This performance will last approximately one hour fifteen minutes with no intermission.

As dusk falls across the city, Scott Silven awaits your arrival at the Palace Theatre. Join him as he orchestrates an extraordinary evening featuring his distinctive theatre of the mind. Become part of an inspiring collective journey as Silven shares a defining story by the light of the moon, and deftly weaves his singular skills to reveal the power of mystery and wonder in your own life.

Following a critically acclaimed sell-out run in New York and North American Tour, Silven now invites you to an experience far beyond a magic show, harnessing his uniquely hypnotic talents in mentalism, psychology and the performing arts for an unforgettable evening of awe-inspiring intrigue.
Scott Silven is a modern-day marvel like no other.

As a renowned illusionist, mentalist, and performance artist, Silven pushes the boundaries of his craft by creating stylish, smart, and critically acclaimed performance pieces that mesmerize audiences across the globe. From an exclusive New York parlour to a grand Parisian stage, his objective is absolute:

to create an extraordinary and breathtaking experience…
A locked box, a winding staircase, an old pocket watch.

As a child, Scott reveled in mystery. This innate fascination with the enigmatic and unexplainable guided him to the craft of illusion at a young age and evoked a sense of wonder that he knew he had to share with others.

Illusionist, mentalist, and performance artist Scott Silven, whose performances have been a spectacular hit at the Edinburgh Fringe Festival, creates immersive theatrical experiences that draw audiences in through artful storytelling, a little patron participation, and a captivating bit of mystery. The Palace Theatre will be transformed for an encounter far beyond a magic show—harnessing Silven’s training in hypnosis, psychology, and the performing arts for an uncommon evening of awe-inspiring intrigue.

While early adopters get a price break, we think this exclusive event will be THE hot ticket for Valentines weekend.