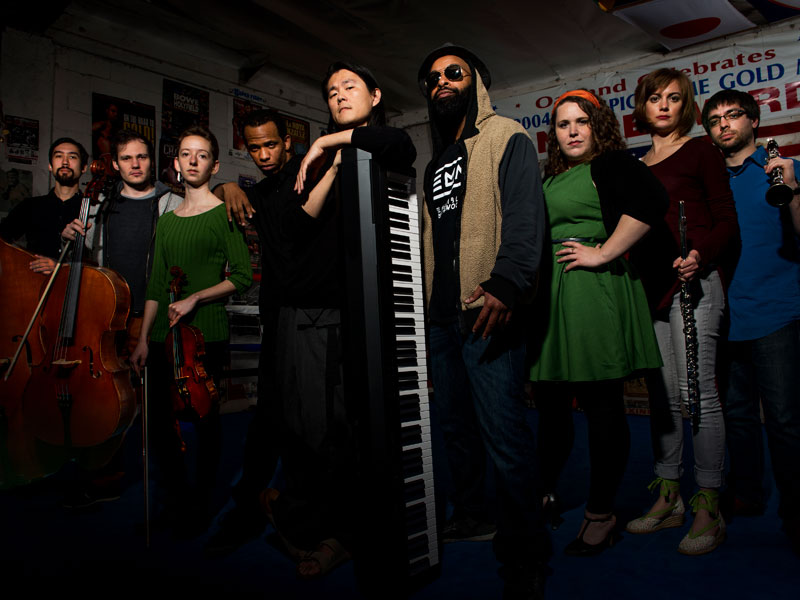 After a successful performance of a novelty piece which featured an MC and chamber ensemble while JooWan Kim was completing his master’s degree at the San Francisco Conservatory of Music, the MC at the time suggested they make an album together. Six months later and writing about an hour of music, JooWan had a profound shift in the direction of his writing. He felt that he found a way out of the stifling contemporary concert music aesthetic in this new way of composition. Kim crystallized his ideas into Method Sampling, a principle of borrowing or sampling of rationales from related as well as unrelated fields, then reframing them into one’s own system.

In 2010, JooWan recruited his best friend from college, Christopher Nicholas to push the project forward in a serious way. Since then, EMN attracted some of the most excellent classical musicians and MCs in the SF Bay Area while gaining national attention from outlets such as ESPN, Wall Street Journal, Huffington Post, NPR, Pitchfork, Upworthy, NowThis, and more.

Prior to releasing a solo album titled, The Art of Dreaming, Sand’Man was cultivated as an emcee during his involvement with the dynamic hip hop group “The Attik.” His association with the group began as a teen and eventually blossomed into something formal. In 2005 the group released the album Jungle Electric. Sand’Man has shared a stage with KRS-One, Dead Prez, E-40, San Quinn, Mr. FAB, Aceyalone, Zion I, Game Rebellion, Medusa and many more. A veteran to performing, he has rocked stages from the Bay Area to New York and Puerto Rico and shined at legendary venues, such as the Fillmore, in front of sold-out crowds. Sandman joined EMN in 2013 and has been featured on Wall Street Journal, NPR, SF Chronicle, OZY and more.

“Nobody has ever attempted anything like this on such a large scale, or with such sophistication.” – NPR

“Hip-hop is the new great American art music and Ensemble Mik Nawooj is on the cutting edge of it.” – Huffington Post

“The textures swimming through the sound are like the world’s fastest ping-pong game: They can make you dizzy, trying to hear and see everything all at once, and you do. …no one seems capable of hitting a predictable note.” – Pitchfork